The constant battle. Plot your story or write it by the seat of your pants?

I used to pants. If I wasn’t feeling the passion, I didn’t write. Now, I do both, and it’s saved my writing. I’m choosing to share my method and madness in case it helps others. If nothing else, you’ll have a good idea of why I’m so crazy afterward.

Get your pencil and paper ready because I’m going to drop some knowledge.

The general mess of it all:

Why did I stop pure pansting? When did I realize I had a problem?

So what did I do?

I turned to The Snowflake Method. I had a vague idea for a vampire novel and thought, what the hell? I wasn’t really vested in it, to be completely honest. I just wanted to write a sexy vampire story because I was bored. I’d read a slew of disappointing urban fantasy novels and decided I could do better, but I didn’t think I’d finish. I thought I’d lose interest. My experiment became Drops of Life, an amazing novel that has already gone through beta reading and will soon be professionally edited. I was 20k words in before I realized what I was doing—I was in love with my story, because I’d explored the world and characters and had become immersed.

So here we go! My modified process:

It starts easy enough—with an idea. I just let it grow. This is the hardest part for me. Usually, when I get an idea I want to just write and write. But I *always* hit a wall. Then that idea gets tossed into the dreaded ‘incomplete’ folder.

For my vampires I gathered the following:

Then I write a small paragraph about their individual arc. Every main character gets one.

Now, why do I do this first? Because I want my characters in charge of the action. When things go wrong, will it be the fault of my hand as an author or will it be due to the hubris of one of the many lives in the story? Which seems like more fun to read?

Besides, detailing my characters allows me to envision specific ways to play on their faults and strengths. This will also keep me from writing them into a corner that they’d never actually end up in.

Of course, characters can be tweaked as things move forward, so don’t worry about anything being permanent. Half-way through writing, some of my toss-aside characters became more valuable and dimensional.

For my romantic couples, I also give them a song. It’s cheesy, yes, but it reminds me to focus. Geirr and Silence’s song is Zedd – Clarity ft. Foxes 😛

Once I think I’ve got that down, I take it further and make a paragraph. Roughly five to six sentences. Every major point gets a sentence, and the last sentence should summarize the ending. *This is a huge step. I can’t even count how many writers I’ve talked to that don’t know the end of their novel before they finish. I used to be that way. I told myself my story would write itself. The truth is, your ending *may* change, but you should at least have some inkling of how it should be. So sit down and end your story!

When I first did this, I considered both the action plot and the romance plot. It took a while to figure out how I wanted the two to line up, and my paragraph was messy. But this paragraph doesn’t have to be perfect. As with the single sentence, you can clean and perfect it for other use, but for right now just keep it about the story. This paragraph is just a tool. You don’t have to show it off!

Here’s the *original* single paragraph for Drops of Life. The story changed as I moved forward, so this isn’t an accurate reflection of the current piece. It’s just something to peek at. The last sentence is missing because spoilers! 😉

On the way to meeting with Geirr to conduct the scheduled evaluation of his house, Silence is set upon by rogue vampires of another prominent house, introducing them to a plot that aims to discredit Geirr and dismantle his house.1 Silence and Geirr, though sired by the same Master, barely know each other and become close while tracking the rogue group and seem to be on the path to a relationship when an ill-timed erotic encounter reveals Silence’s blood affliction and leaves the two unsure how to proceed for many reasons.2 The two eliminate the rogue group only to get a disturbing wake-up call that they’ve only hit a small fragment of a grand design to tear their sire’s world apart.3 Geirr wonders if Silence could find a vampire or two to join their plan, but Silence can’t bring herself to risk the only vampire she would trust—her eldest sister.4

As you can see, it’s messy! That’s fine. Until this moment, it was my secret. Bathe in the marvelous run-on sentences.

Alright, back to business. I’ve got my sheets and this paragraph. Now what? For my story, I picked through this paragraph and revised to color-code each section as either ‘action plot’ or ‘romance plot’ because I wanted balance. I didn’t write a romance with a side of action, or an action novel with a romance subplot. I aimed for equal parts stabby and steamy.

Reasons to use a spreadsheet instead of a long-ass list:

Up to this point you’re probably wondering where the pantsing comes in. Well, my scenes have something that needs to be accomplished, but anything can be achieved via multiple ways. I don’t always write the scenes in order. I don’t have to. I can write whatever I feel like writing that day. If I want to go through and just write the sex, I can. Here’s a snippet of what my main spreadsheet looked like early during the writing process. All the sentences are shaded, but if I hadn’t written the scene yet, it would be white. Your sheet can be as complex or simple as you want. 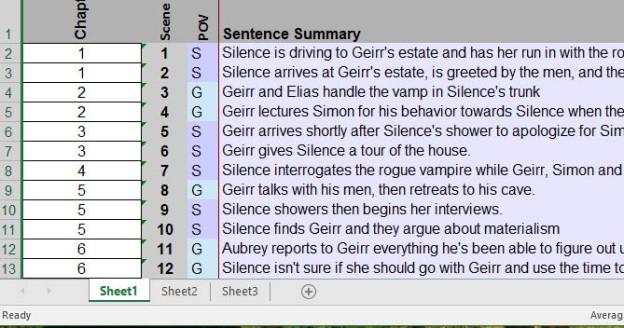 The rest is simple. Finish the story.

How does this compare to my previous writing?

I have a folder of abandoned projects. The one novel I managed to complete took SEVERAL years. Using this method, I finished Drops of Life (86k) within a few months—four, I believe. I also used this to tackle my 2016 NaNoWriMo project. Currently, I have a few other stories undergoing the initial phases of this. I don’t use this for everything, though. I find for short stories I can just use the first few steps and skip the spreadsheet.

And sometimes I still 100% pants, but trying this method has upped my writing game! While I wrote Drops of Life using this, I also pantsed a 50k novella. That’s right. Two separate projects accomplished in a handful of months, because I had amazing focus and developed discipline for my writing.

So why not give it a try? You may toss this technique but what have you got to lose? You may develop your own crazy method! 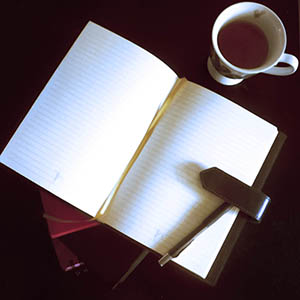 Evangeline Gold is best known for forum lurking and snark, but also writes naughty romances and occasionally has helpful advice. She loves to add a little magic to her stories, playing off existing folklore and myths while adding little twists. Vampires are her soft spot, and her true love will always be fantasy. Currently, she is working on the first novel in what aims to be a vast series. Vampires, intrigue, and delightful sex? Yes indeed.

More on Eva can be found at her own wordpress blog.

2 thoughts on “Plantsing for non-gardeners by Evangeline Gold”

This site uses Akismet to reduce spam. Learn how your comment data is processed.

Archive of Past Goodness